Photo above (contributed): Former Caledon resident Kevin Leach and Project Volya members handing gear over to a military doctor who works at the front line near Kharkiv. The doctor’s face is blurred out for his safety.

It’s a kind of hell most of us cannot even imagine. Going about our daily routines here in Canada it’s tough to picture being huddled amid bombings and living in fear for our family’s safety and lives. But this is the reality for many families in Ukraine as their country, homes, and families are torn asunder.

Kevin Leach has seen both worlds.

A former resident of Palgrave, Kevin went to Palgrave Public School, before it was rebuilt, and grew up with the kind of idyllic life that small town Caledon offers. Caledon was to remain home until he turned 27.

Kevin initially landed in Ukraine 4 years ago. “I first went to Ukraine to work in the Organisation for Security and Cooperation in Europe (OSCE) Monitoring Mission” he says. “The OSCE’s Special Monitoring Mission  has been deployed in eastern Ukraine since 2014 when war broke out Ukrainian troops and Russian-backed rebels.”

Earlier this year as the Russian invasion began, Kevin and his wife were in Kyiv. “All Canadians on the mission had been “ordered” to leave Ukraine, but my wife didn’t have a visa for Canada so I refused to go.” he explains.

He says at first he felt anger and indignation “like few people can imagine”. But then came a fierce determination to contribute to victory in any way he could.

“My wife asked me not to fight, so I had to find a way to put my military experience of 10 years as a army reservist to use that wasn’t as direct. After having enough time to realize what was and wasn’t needed by Ukrainian forces, I landed on tactical medical supplies. I knew what to get and where, and what kind of things to avoid.”

So began Project Volya, a word Kevin says means freedom, emphasizing that “freedom is central to Ukrainian national identity, and because volya in particular has a long history of use in pro-Ukrainian slogans and poetry.”

The Project took on traction and Kevin was joined by 3 supporters from British Columbia – Milos a business consultant, Paul a doctor, and third partner who helps consult on suppliers.

“They got in touch with me as a group after Milos made a trip to Poland to volunteer and the other two had prepared to come and serve as front line medics, but were prevented as they’re both currently serving members of the CAF” says Kevin. 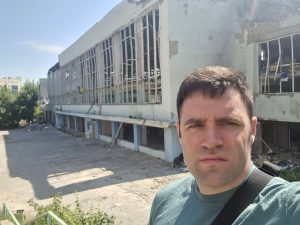 Contributed photo: Kevin Leach in front of a sport complex in Kharkiv he says was destroyed by the Russians early in the war.

He states that funds raised are used “primarily to buy tactical medical supplies, tourniquets, chest seals, and hemostatic gauze. We also buy protective gear like ballistic eyewear and hearing protection, though this is a secondary concern. Our latest effort is to supply large medical rucksacks full of supplies for dedicated medics to treat multiple patients.”

As for distribution to those with the greatest need Kevin says “Everything in Ukraine works by personal relationships. Milos came to Ukraine in June and together we brought roughly $14,000 worth of gear to a frontline city called Kharkiv, in the northeast of Ukraine. With the help of an international soccer league that Paul belongs to, we were connected to local doctors who put us in touch with an army doctor there. This way we made sure that we would have a reliable connection to the end users, and our donations wouldn’t end up in a warehouse or sold by unscrupulous traitors.”

As Kevin and I connected, by email, for this interview he and his wife, who was finally successful in getting her visa,  were sitting in Frankfurt Airport waiting to fly to Toronto. But their visit here will be brief and they plan to return to Ukraine at the end of the month. He feels they are relatively safe in Kyiv and it is home for them. He shared that “I’ll even go east again, since it’s a relatively small risk to take for the huge gains we make when we build relationships out there.”

I ask if this experience has changed him as a person and affected his direction in life.

“It has taught me a lot” he states with certainty. “I am a better judge of character after learning to sort the fanatics and scammers from the people who can and want to help. It has also made me a lot more optimistic about the future, funny enough. Seeing how people have reacted to this war has shown me that we can still unify behind a moral cause. I’ve seen dozens of selfless and brave foreigners come out here to join us. But this war has also planted a little seed of anger in my heart that I don’t think will ever really fade away. Seeing the damage done to our cities, the footage of innocent people gleefully murdered, I don’t think I’m going to be able to forgive a lot of this in my lifetime.”

While visiting back in Caledon Kevin will be doing a firsthand account presentation at Forster’s Book Garden, 266 Queen Street South, Bolton on Thursday August 11th at 7:00 pm