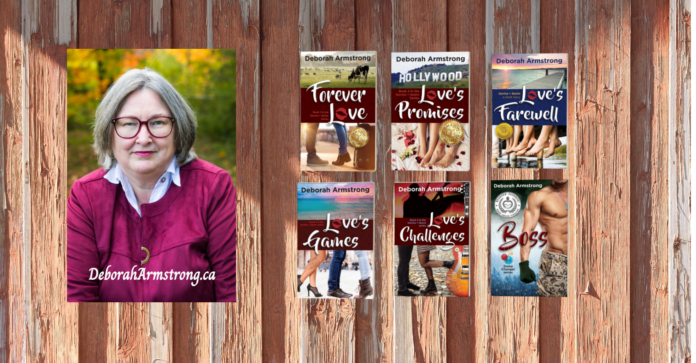 Farms are special places. While thoughts of idyllic pastoral settings come to mind, every farmer who has ever lived would tell you the price of that peaceful rural life is hard work and long hours. But the rewards are great and include a connection with the earth many of us never experience. And for Deborah Armstrong, somewhere in a busy life surrounded by dairy cows, a growing family, and crisp country air, she also found a connection to her creativity.

Born in Edmonton, Alberta, Deborah moved to Ontario at age six when her dad transferred here for a new job. In 1970 the family built a home in Terra Cotta. As a teen, she attended Mayfield Secondary School.

In 1983, Philip and Deborah moved to Armstrong Manor Farm, a 100-acre dairy farm on Dixie Road just north of Old School Road. Philip’s ancestors had settled in the area in 1828, and Armstrong Manor is a sixth-generation family-run farm. Deborah settled into a happy life as she and Philip raised a family of two daughters and a son, and Deborah looked after the farm’s accounting.

While Deborah’s degree is in History and English, and people would occasionally get her to proofread documents for them, she says it was much later in life when she started to write.

In fact, it was the summer of the year she turned fifty. That year Deborah, always a reader, suddenly found herself “just eating up everything I could read.” She recalls hitting a point where she had read so much the thought suddenly struck her “I think I have a story in me.”

With that in mind, she went into her office, sat in front of her computer and started to write. She wrote all that summer and into the fall. By the time she stopped in December, she had not one book but two, Forever Love and Love’s Promises.

Deborah now has five books and one short story to her credit, but the first is still her favourite. “I developed those characters and grew to know and fall in love with them myself,” she admits.

Later, she explains, you find out that, for example, 300,000 words are too much for a romance, which is how her first book became two.

Sometimes the story comes to her first but other times it’s the characters. She recalls seeing a couple engaged in a long affectionate goodbye at an airport and feeling how that would make a great scene someday in a book.

“I watch what’s going on around me and then incorporate that into my books” she says. “Because they are real scenes.”

While the talented author says she does not get what is commonly referred to as writer’s block she does find herself waiting for her characters to speak to her. “I often find myself working on more than one book at a time” she explains. “It’s because I’m waiting for my characters.”

Deborah is also a member of the Caledon Public Library’s  group Writers’ Ink. The group used to meet at the Margaret Dunn Library but is currently meeting at a member’s home. “At one of our meetings, we worked on writing prompts, and a writing prompt ended up in my book Boss” Deborah reports.

Deborah says her family, Philip and the three adult children, are all very supportive of her writing.

“Phillip has read all of my books. He would tell people all about my books everywhere he went. My daughters were actually my first readers. I would print everything off that I had written for the day and put it into a binder and leave it for them to read when they got home. They would offer feedback about when things worked and when they didn’t. They still read my books before they go to print.”

As a new author Deborah initially used a “vanity publisher” as she thought the books might be a one off. Time passed and she learned more about self-publishing and she reclaimed her books. She edited them and did new covers and interiors and set up her own publishing company, Terrahill Publishing, and her books are published under that. Additionally she offers proofreading for others.

Deborah says she still makes time to read every day. Her goal is to read a book a week but she says the best thing is to go on holidays and then you can read a book a day.

She describes her genre as romance and women’s fiction, and her demographic as age 35 and up.  The books she pens are spicy, contemporary romances with a bit of drama and suspense thrown in.

Time to curl up with a great book!

You can find Deborah’s books on Amazon.ca, her own website, and locally at Forster’s Book Garden in Bolton.