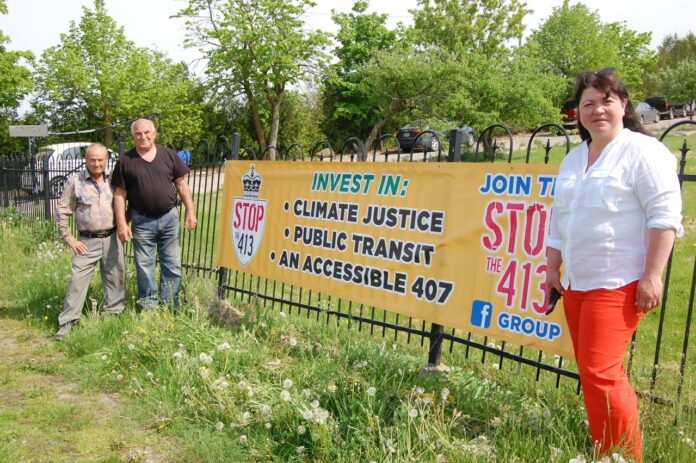 Caledon has lost a true champion. As most readers are no doubt aware, community and environmental activist Jennifer (Jenni) Le Forestier died in early December of cancer. She was only 48.

The Belfountain resident was well known for her work with a number of environmental organizations including Reform Gravel Mining Coalition, the Peel Enviro Hub, the Coalition for the West Credit River, and the Stop the 413 and Stop Sprawl movements. She was the 2021 Green Party candidate for Dufferin-Caledon.

Judging by the outpouring of comments in the mainstream press and social media, Jenni touched the lives of many people. Tributes have been made by Green Party of Ontario leader Mike Schreiner, Environmental Defence engagement manager Mathew Lie-Paehlke, Caledon Mayor Annette Groves, and many others.

“I met Jenni through our efforts to stop Highway 413,” says her friend and fellow activist, Vaughan resident Irene Ford.

“And that (the meeting) was a gift. I will be forever grateful. It was a transformative and powerful friendship. Jenni was a force, her personality radiated, her smile welcomed everyone, she fought for what was right, brought out so much from so many but most of all the strength and hope for change, for a better, more equitable and socially just world.”

A particularly poignant eulogy of Jenni’s achievements and causes was delivered during the December virtual meeting of the Reform Gravel Mining Coalition by Cheryl Connors, a candidate in the municipal fall election. As was noted by the moderator, there would probably been more than a few teary eyes if the meeting had been an in–person event.

Although I didn’t know Jenni for very long and really didn’t know that much about her, I also considered her friend. As was the case with so many others, that friendship was forged by our common opposition to Highway 413.

We jointly organized two separate protests in downtown Bolton and a third in southwest Caledon at the intersection of Old School Road and Highway 10 near the site of a “Future site of Highway 413” sign.

What was particularly impressive about Jenni was her remarkable skill at balancing numerous tasks, including her environmental volunteer work, her profession as a music teacher, and as a mother of a young daughter.

She also possessed an amazing ability to read and comprehend rather dull planning reports and municipal studies, summarizing the contents and then asking tough and penetrating questions at municipal council and planning meetings.

Jenni would also make the time and put in the extra effort for issues she believed in. About two years ago I made arrangements with a Humber Station Road resident to temporarily erect a colourful Stop Highway 413 banner on a wrought iron fence. Jenni was in possession of the banner, so she drove from her Belfountain home to Bolton to deliver it. As the homeowner only wanted the banner displayed for a limited time, she later returned and picked it up.

Another example of her unbounded energy and dedication was the long commute she made from home to participate in a rally against the Bradford Bypass at the Holland Landing constituency office of York Simcoe MPP and Minister of Transportation, Caroline Mulroney.

The rally was one of several which occurred that day including one in downtown Bolton against Highway 413. As soon as the Bradford protest was finished, Jenni immediately headed to Bolton to take part in the demonstration there.

At a certain point, which is hard to pinpoint, Jenni seemed to fade from view and was no longer active. I assumed she was preoccupied with other aspects of her life. Although I heard rumours of “health issues,” I had no inkling of how serious those issues were. When I received an email that she had died, the shock was enormous.

Jenni’s passing is a hard burden for her family and a great loss for environmental groups in Caledon and the Ontario Green Party. Rather than mourn her departure, however, what she achieved in life should be a beacon, a shining light to carry on the fight. That’s the fight against Highway 413, the full onslaught on the environment, the whittling away of the Greenbelt, the weakening of the conservation authorities, and all the other appalling policies of the dictatorial Doug Ford Ontario government.

Jenni Le Forestier was a concerned citizen, an environmental warrior, and a wonderful human being.

In her memory, a GoFundMe account has been set up to raise funds for her daughter’s education.