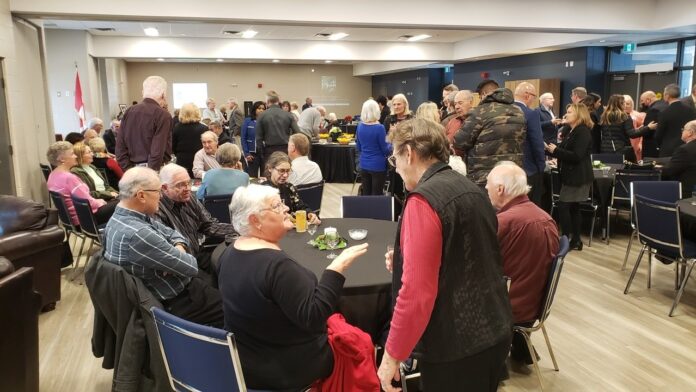 On Tuesday, December 20, 2022, the newly renovated Caledon Seniors Centre re-opened its doors to an enthusiastic crowd of guests.  Rotary Place was originally a vision of the Rotary Club of Bolton. After considerable hard work and determination the building was constructed and opened its doors in 1995. Then in  2011 Rotary Place was passed on to the Town of Caledon as a capital asset.

The purpose of the Centre has always been clear: “to relieve loneliness and isolation of the aged by establishing, operating and maintaining a senior citizens center to provide recreation, education and other programs for senior citizens.”

On this, the day of the grand opening, the doors opened at 2:00 p.m. for the celebration and eager seniors could not wait to see their expanded and renovated Centre. Visitors immediately began pouring into the main auditorium and settling into groups at round new tables, conversing happily. 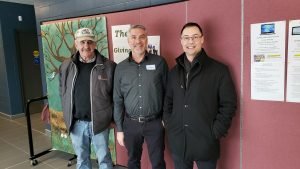 Longtime volunteer and member of the Board of Directors, Derek Paterson took us on a tour of the new 8,000+ square foot expansion. Derek pointed out the state-of-the-art commercial  kitchen, the new auditorium that can be converted into three separate meeting rooms, and the therapy room. The project also included upgrades to the OPP satellite office. The Centre is now 90% completed, with final landscaping and access to the outdoor courtyard to be completed in the spring of 2023.

Rieny Van Loon, the Site Superintendent, and Michael Cicerani, the Project Manager, explained how the concept of the expansion was introduced as far back as 2003. However it took until September 2021 to get shovels into the ground at the the official ground-breaking ceremony.

Centre President Jane Chapman said that it was the Town’s 2020 redirection of development charges for the expansion and renovation of the seniors centre that kicked the project into action. 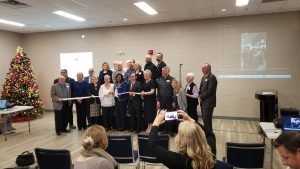 Members of Council, Provincial government, and CSC staff and volunteers

Members of Caledon Council along with special guests MP Sylvia Jones, Minister of Health, and MP Raymond Soon Jung Cho, Minister for Seniors and Accessibility, were on hand to offer congratulations. They, in addition to senior Centre staff, all thanked the project partners, construction businesses, the Town, and the Centre’s staff and volunteers for helping to bring this almost two decades long dream to life.

Bottom line – the new and improved Seniors Centre project became a reality thanks to funds from the Town of Caledon plus the Federal, and Provincial governments, many generous donations from community service clubs, local businesses, and private donors, and the hard work and dedication of extraordinary volunteers. Talk about teamwork! The cost is reported at $8.4 million.

Bolton Councillor Rosa poignantly reminded us of the loss of connectivity and interaction that had impacted so many of our seniors during the height of the COVID pandemic. It was obvious from the crowd’s response that they were happy to be together again

When asked how she felt about the grand opening, Jane Chapman replied, “I am so pumped! This is our baby. This is our place for our seniors.” 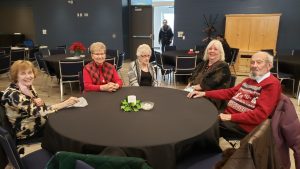 And seniors showed their appreciation by coming out in the hundreds. By the time the speeches were to begin at 3:00, the Centre was packed, every table filled and buzzing with camaraderie and conversation. The new kitchen was put to good use as the crowd was treated to a feast fit for these loved and respected elders now sitting at new tables, on new chairs, and dining from new crockery.

Given the increasing population expected to swell into Caledon in the next few decades, this new facility will keep our seniors connected and interacting for many years to come.

As the celebratory cake was being cut for the finale, loneliness and isolation were banished in the sweet celebration of a community success story. One could only imagine the stories and memories that permeated the room that afternoon. What was tangible was the feeling of thanks towards those who worked so long and so hard for years to make this dream come true.

After almost two years of social distancing and community interaction, our seniors once again have a safe place to meet, engage, learn, entertain, and celebrate their seniority.