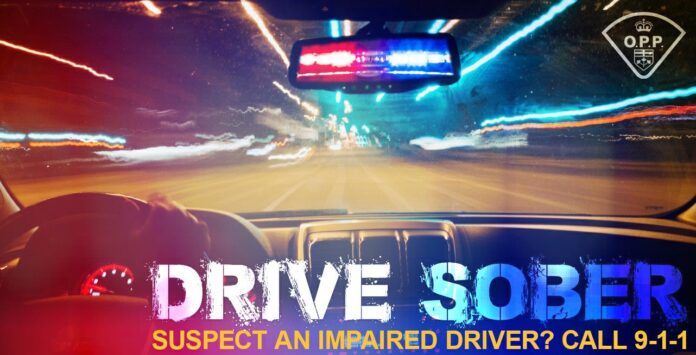 Last weekend, officers from the Caledon Detachment of the Ontario Provincial Police (OPP) have charged four drivers with impaired operation.

On November 11, 2022, at approximately 11:17 p.m., officers responded to a traffic complaint on Mayfield Road in the Town of Caledon. A motorist contacted the OPP to report concerns regarding the manner in which a vehicle was being operated. Officers located the vehicle on The Gore Road and spoke to the driver. Grounds were formed that their abilities were impaired. The driver was subsequently arrested for impaired operation and transported to the Caledon OPP Detachment where breath tests were conducted.

As a result of the investigation, Jaskaran GARCHA, 27, of Burlington, was charged with:

On November 12, 2022, at approximately 12:08 a.m., Caledon OPP was alerted of a single motor vehicle collision on Airport Road, near Old School Road. Officers responded and located the vehicle on its side. Since officers suspected the driver’s abilities to be impaired, a breath sample into an Approved Screening Device (ADS) was requested. As a result, the accused was arrested for impaired operation and transported to the Caledon OPP Detachment where further breath tests were conducted.

Vishavranjit KLER, 29, of Caledon East, was charged with:

On November 13, 2022, at approximately 1:53 a.m., officers responded to a vehicle into the ditch on Mayfield Road, near Heritage Road. Once on scene, officers formed grounds that the driver’s abilities were impaired and affected an arrest. The driver was transported to the Caledon OPP Detachment where breath tests were conducted.

As a result, Ravi TAMAKUWALA, 25, of Brampton, was charged with:

Lastly, in the same early hours of November 13, 2022, at approximately 2:48 a.m., an officer was conducting a proactive patrol on Mayfield Road. At that time, near McLaughlin Road, the officers observed a vehicle being operated in an unsafe manner. A traffic stop was initiated to speak to the driver. Grounds were formed to arrest the driver for impaired operation, who was subsequently transported to the Caledon OPP Detachment where breath tests were conducted.

Fabian BRISSETT, 45, of Brampton, was charged with:

All four vehicles from the four incidents were impounded for a period of seven days, and the driver’s licences were suspended for 90 days. The four accused are scheduled to appear at the Ontario Court of Justice in Orangeville on January 26, 2023, to answer to the charges.

The OPP remains committed to taking alcohol/drug-impaired drivers off our roads through enforcement and public education. Drivers are reminded that no amount of alcohol or drugs in your system is safe when driving. If you plan on drinking or consuming drugs, plan to not drive. Instead, arrange for a designated driver, take a taxi or public transit, or come up with another plan that takes impaired driving out of the picture.

With the holiday season fast approaching, the need to make those alternate arrangements will increase. In Caledon, Home James offers a FREE designated driver service. The program runs from November 25 to December 31, every Friday and Saturday from 9:00 p.m. to 2:00 a.m. (excluding December 24). More information is available at: https://www.homejames-caledon.ca/.