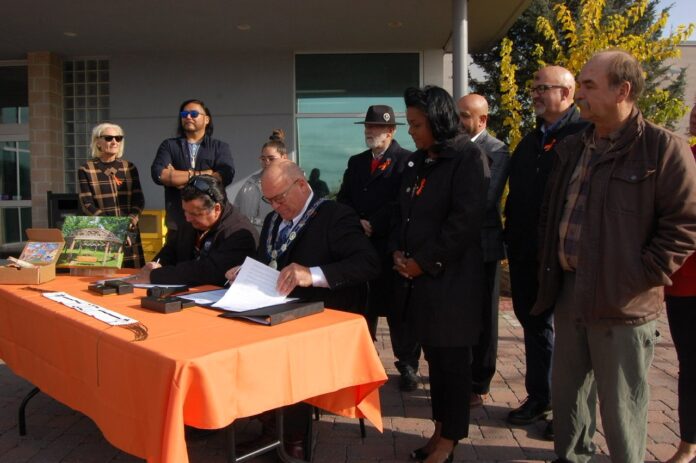 Almost a year to the date of an historic joint-session of Caledon Council and Mississaugas of the Credit First Nation, another significant step in strengthening the relationship between the Town and the First Nation was taken near the end of October.

As First Nation members and Caledon councillors—both newly elected and retiring—plus town staff and the general public looked on, Mayor Allan Thompson and First Nation Chief Stacey LaForme a signed a Memorandum of Understanding at the Caledon Wellness Centre in Bolton. 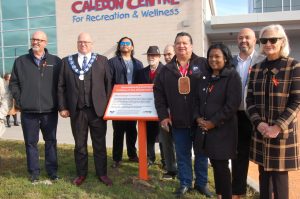 Caledon is the first municipality in Peel Region to sign such a MOU and the event came just a few weeks after the town raised the First Nation’s flag at the town administration complex in Caledon East on September 30—the National Day for Truth and Reconciliation.

Preceded by introductory comments, a smudging prayer, an exchange of gifts, and a land acknowledgement by the mayor, the signing occurred at a table draped with an orange tablecloth. Orange is the colour chosen by First Nations peoples to honour children of the residential school system.

“All worthwhile things have a beginning and this is ours,” said Thompson, who told the audience he has learned a lot about the Mississaugas of the Credit First Nation after participating in two of their sessions in 2017.

At the 2018 Caledon Day, the mayor presented LaForme with a Wampum Belt which was inspired by the 200th anniversary of Ajetance Treaty 19—in which the Mississaugas sold their lands. The treaty encompassed what is now the Town of Caledon.

“We needed to renew (that agreement) through the symbol of the Wampum Belt and we should try to do that annually,” said Thompson. Noting that COVID interrupted and delayed that renewal, he encouraged the incoming new council to resume that practise.

He also expressed a hope that other municipalities would also sign MOUs with the First Nation.

Following the signing, the mayor and Chief LaForme raised the First Nation’s flag, which would remain flying there until October 31st. 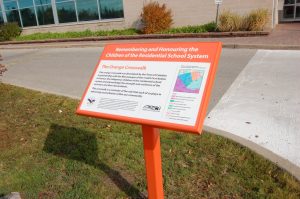 Then they unveiled a plaque which commemorates the adjacent Orange Crosswalk leading into the Wellness Centre.

Developed by town in partnership with the First Nation, the crosswalk honours “the indigenous children of the residential school system and acknowledges the strength and resilience of the survivors and their descendants.”

In an interview, LaForme said the MOU opens up a path to discussion and understanding between the First Nation and Town rather than stipulating hard objectives. “It commits us to working together. It’s a journey.”

An important initiative in that journey will also be occurring in Caledon, the assembled spectators learned.

Closed since 2017 because of low enrollment, the Credit View Public School at Mississauga and King Roads is being transformed into a Centre for Indigenous Excellence and Land-Based Learning, said Stan Cameron, Caledon’s Peel District School Board trustee.

The project was approved in September, although a formal announcement won’t be made until November to give the board time to communicate “with its Indigenous partners.”

Currently, the school is being “incrementally” redeveloped. There are a number of machines on the property and that has been the source of some irate confusion and consternation, said Cameron, acknowledging many people think the building is being torn down.

“No. It’s not being torn down,” said Cameron, who described the school site as one of the most beautiful in the Peel board’s system. “I’m really glad we didn’t sell it,” he added later.