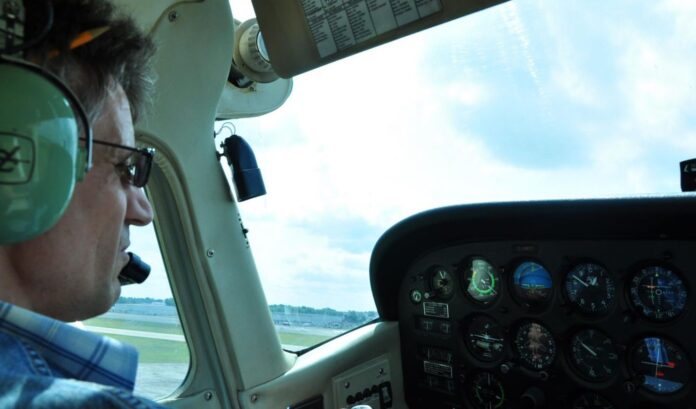 The Brampton Flying Club, located on McLaughlin Road just south of King Street in Caledon, has been helping folks reach for the sky for decades. Recently it was inducted into the Canadian Hall of Fame, receiving the Belt of Orion Award for excellence.

The Brampton Flying Club (BFC) got off the ground in 1946 with just one inst­ruc­tor, Bud Young, who trained students on a de Havilland Tiger Moth.  Today, it is one of Canada’s busiest general aviation hubs. A not-for-profit corpora­tion, the BFC owns and operates a certified airport, Brampton-Caledon Airport – the largest privately-owned airport in the country. It is home to a world-renowned flight school, the Brampton Flight Centre, that boasts a modern fleet of 24 aircraft, plus the original Tiger Moth (now fully restored), and two flight training devices operated as part of a comprehensive instruction program. Thousands of pilots have earned their wings at BFC, from recreational pilot permits to private and commercial licenses with multi IFR ratings. Hundreds of students have also graduated from its Transport Canada approved Integrated Airline Transport Pilot Licence and Flight College programs and have landed successful careers with domestic and international airlines.

The BFC is home as well to maintenance and refuelling services, a pilot shop and restaurant, the Toronto Chapter of the Recreational Aircraft Association, the Great War Flying Museum, the 892 Snowy Owl Air Cadet Squadron, and many privately owned aircraft and hangars.

Since its beginnings, the Club has promoted the growth of Canada’s aviation industry and has contributed to the local and broader economy. It remains an active citizen within the greater Caledon area through numerous initiatives such as the annual Airport Day fly-in and “Light Up the Runway” in support of the Bethell Hospice in Inglewood, Ontario.

Canada’s Aviation Hall of Fame recognizes the exceptional nature of the Brampton Flying Club’s contributions to Canadian aviation and is pleased to induct the club into the Hall with the Belt of Orion Award for Excellence for 2022.