Janet Manning: The End Of An Era At Caledon Public Library 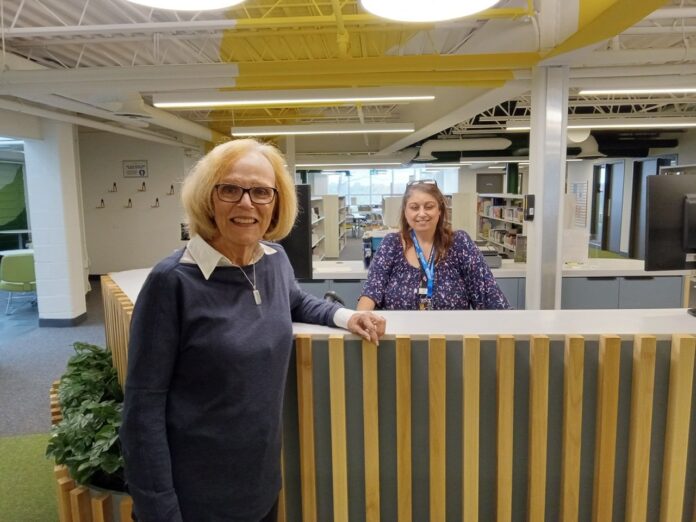 Woven into the fabric of every community are a few robust and resilient threads that are the true connectors. Connectors that serve all parts of the community – urban, rural and the in-betweens – and then pull it all together, making the community a stronger and better place.

For Caledon one of those true connectors is the Caledon Public Library.

While building literacy is at the core of CPL it has grown to be a critical team player, partnering with key organizations to promote culture, facilitate education, inspire creativity, embrace inclusivity and create environmental awareness. It has helped create and sustain an engaged community.

Less obvious, but no less important, than the smiling faces you recognize as you pass through the Library’s doors, are those behind the scenes. For example the faces that make up the Library Board.

Janet Manning’s face has been a consistent one on the CPL Board for 12 years. She is now ready to step down from that role and she’ll leave some big shoes to fill.

JSC spoke with Janet earlier this month about her tenure with the Board and, as the Board will be seeking new members in November, what attributes would make someone a good fit.

When she retired from her own career Janet says she was looking for a volunteer opportunity that would be “rewarding, a challenge, and utilize my skill set.” A self-described avid reader, library patron and someone who keenly recognizes the value of libraries Janet responded to an ad for Board members in 2010.

She was accepted and remained for three terms, serving the last two as Chair.

I asked about her remarkable long tenure and how she remained interested and inspired for 12 consecutive years. “There was a lot going on while I was part of the Board” she begins. “I was inspired by the dedication of the staff and the other Board members. I watched the Library continue to grow and to meet the changes and challenges for the community.”

The Board’s composition changes every four years, coinciding with the new term of Council. Janet’s long tenure undoubtedly helped provide continuity to ease the orientation of new members and bringing them up to speed.

Janet’s background was a long career spent entirely in public education; teaching, consulting and administration. She worked with the Ministry of Education as a consultant for Principals for years.  That rich career provided many experiences to carry forward to her role on the Board.

“Within my time on the CPL Board we are now in process of developing our third strategic plan” says Janet. “We are also on our second Master Plan. I felt that with my experience developing and implementing strategic plans I definitely brought a skill set to those processes. I had also developed good communication skills from working with parents and students and administration and I had worked in different locations which enabled me to understand diversity issues. Working in an administrative role I had to understand budgeting and part of our role on the Board is to be fiscally responsible to the community.”

The hiring of a new CEO was one of the larger events that Janet recalls being part of. “That was a very big deal” she admits “working with the consultant and Human Resources at the Town. The former CEO had been with CPL for a very long time and no one on the Board had any previous experience with that kind of thing (for the Library).”

“We also developed assessment criteria for performance appraisals which we didn’t have before. That criteria is still in use today.”

“We developed a really clear focus for advocacy. We developed a succession plan, to support the Town and giving them some ideas what kinds of things to look for with the Board and what would be needed.”

“We have the new accessible reading garden at the Southfields Village branch, the refurbishment of the Albion Bolton branch, we eliminated fines, and we added things like hot spots and collections where you can borrow things like musical instruments, and working with the community with arts programs.”

The Margaret Dunn Valleywood branch is set to undergo a transformation starting in November. The modernized branch will house a maker space and recording studio as well as spaces for working, learning, and meeting…and of course books. Maker spaces are considered one of the best ways to learn the skills that are essential today and for the future. They are equipped with resources such as computers, 3-D printers, audio, and video capture and editing tools, and traditional arts and crafts supplies. They provide a place where people create, invent, learn together, and build skills for life.

Currently the Board is also involved in creating a Master Plan for the future of the Library. And considering how to meet challenges such as budget pressures, staffing and finding great people for the Board.

With Caledon’s upcoming population growth the next few years will be very exciting for CPL. For example the Caledon East branch will be relocated when the expanded community centre is ready next summer. CPL clearly values their smaller branches as much as the larger urban ones and recognizes their their importance as meeting places and hubs for those communities.

Janet sees passion for the Library as one of the most important attributes for new Board members, along with the ability to see it and understand it as the community hub that it is. The Board also needs a variety of skill sets that come from a background in business, or social services, or education, or finance, or government.

“It is also important to recognize there is a time commitment” says Janet. “It is more than just a meeting. There are committees and there is advocacy work to be done.”

And there’s always the work of trying to ensure the community understands all that the Library currently facilitates for everyone from children and teens to seniors.

As Janet concludes “The Library touches everybody. The Library is for everyone.”

The CPL Board will soon be commencing its next term.  If you are interested in being considered to serve on the Board a great next step is to attend one of  two Get On Board events being hosted in November. Come and learn about the roles and responsibilities of the CPL Board and hear from current Board members in this panel discussion facilitated by Caledon’s CEO and Chief Librarian, Colleen Lipp.

The post Janet Manning: The End Of An Era At Caledon Public Library appeared first on Just Sayin' Caledon.