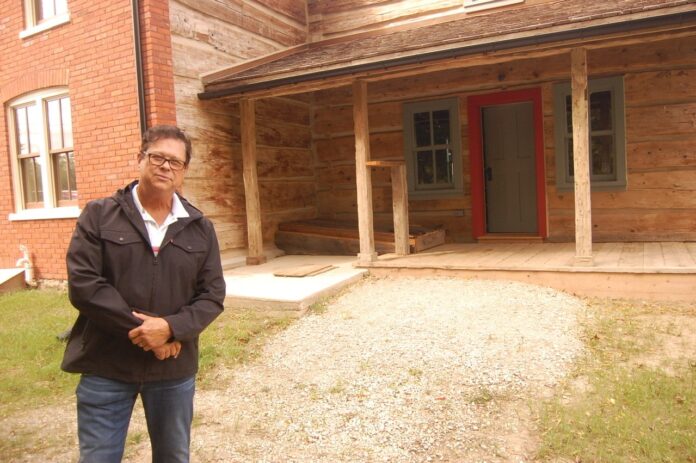 Photo Credit Dan O’Reilly: (Above) Alan Duffy at the restored Duffy house. The original red brick appearance on the west wing was recaptured by turning the painted bricks around, while the large thick logs on the east half were left exposed.

History has come full circle and will continue to be made at the restored Duffy Homestead on Emil Kolb Parkway at the north edge of Bolton.

After being sold more than 60 years ago, it has been returned to the Duffy family possession. It was purchased in 2018 by entrepreneur Alan Duffy, who has been painstakingly restoring the property ever since.

At a special commemoration reception in September, members of the Albion Bolton and Caledon East historical societies, Town of Caledon representatives, and other invited guests were given a tour of the restored house and barn and a preview of the next chapter of this Caledon landmark farm. 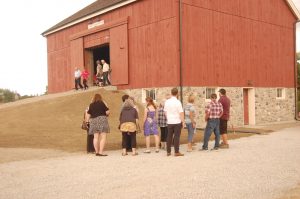 Photo Credit Dan O’Reilly: Former Peel Region chair Emil Kolb and his wife Beryle were among the visitors at the September celebration.

Held in the barn and featuring an Irish folk group playing traditional Irish music, the occasion commemorated the 190th anniversary of the purchase of the property by the Duffy family.

As well as being given an upfront tour of the house and barn, and the grounds, the visitors also learned the homestead will be the site of a private museum operated by the non-profit Duffy Heritage Foundation.

Details of the restoration and the museum venture were provided by Duffy, who told the assembled guests that he “wanted to hold this (the reception) on the exact date of the purchase.” However, he deferred the event so as not to interfere with the various bicentennial celebrations throughout Caledon.

Duffy is the direct descendant of widowed Irish immigrant Eliza Duffy who purchased the property from the Canada Company on August 27 1832, completing the last payment in 1845. Eliza lived there until her death in 1872 and the farm would remain in the family’s possession until it was sold in 1956 by Walker Duffy.

“He (Walker) didn’t have any children and I don’t think farming was his thing,” said Duffy.

In an interview with Just Sayin’ Caledon, he outlined his reasons for purchasing the property and embarking on the extensive, and expensive, project.

A retired business owner who is also president of the Oshawa-based Ontario Regiment Museum, Duffy didn’t know about the farm until he was in his twenties. He later visited the house on the invitation of the then-owners and recalls thinking: “This is where my ancestors lived.”

At one time, he could have purchased the property for $110,000, but didn’t have the money at that time.

But he always maintained an interest in the property and periodically would drive pass it. Then, in 2018 he learned from his daughter Lauren, who lives in Bolton, that it was for sale and went head and purchased it.

“I’ve always been in interested in genealogy and I was able to do it” says Duffy speaking about the initial purchase of the three-acre property and his subsequent purchase of adjacent land so that the farm now totals 60 acres.

At the same time he adds that: “I had no idea of what I was going to do with it.”

But with the help of his family, including Lauren, son Michael, and his sister Gail, he launched an ambitious project to reclaim the land and restore the property. The barn was dismantled and the rebuilt on a new concrete foundation with an exterior facing of the original fieldstone. 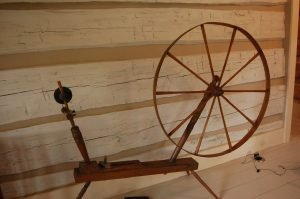 Photo Credit Dan O’Reilly: As part of the objective to reflect the house’s heritage, a number of artefacts such as this old spinning wheel have been interspersed throughout the building.

As for the house, it has been restored back to its former appearance in various historical period stages, which roughly correspond to the various stages, over the decades, that the house was enlarged. At some point, a new wing was built on to the original single-storey log house built by Eliza’s second son James.

An addition was added and then later, second floors were added to both wings, says Duffy, who used old family records and photographs and “detective work” to trace that evolution. “I could see where the old fireplace and the wainscotting were.”

As part of the objective to reflect the house’s heritage, he also purchased a number of artefacts, such as an old spinning wheel and 1915 crank telephone, and placed them at key points throughout the building.

In 1906, as was the custom of the time for log houses, it was clad with red brick. Decades later, however, the red brick was painted grey. Removing that grey paint and returning the brick to its original appearance was one of the toughest challenges of the entire restoration, says Duffy.

“We tried every substance we could find, but couldn’t remove the paint. So we turned the bricks around.”

However, that is only on the west wing which faces Emil Kolb Parkway. The large, thick logs on the east half have been left exposed: “because I could see their beauty and couldn’t cover them up.” 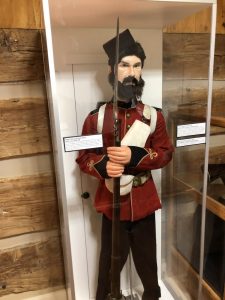 Photo Credit Dan O’Reilly: A major feature of the museum will be an exhibit room featuring 4 glass-encased mannequins of different members of the Duffy family with military service in both Canada and the United States. This one is of Private Michael Duffy of the Albion Infantry Company, Canadian Militia, who was stationed on garrison duty in Albion during the 1860s Fenian Raids.

While the restoration was progressing, so as well were plans for the museum. In no small part, the catalyst was the interest shown by the Caledon community.

“People would stop by and ask what was happening to the property,” says Duffy, who established the Duffy Heritage Foundation to manage the museum and will eventually donate the property to the foundation. He also has the support of the Canada Ireland Foundation, of which he is a board member.

One of the components of the museum will be an exhibit room featuring four glass-encased mannequins of different members of the Duffy family with military service in both Canada and the United States. One is of Private Michael Duffy of the Albion Infantry Company, Canadian Militia, who was stationed on garrison duty in Albion during the 1860s Fenian Raids.

“Mr. Duffy wanted to showcase the room as an integral part of the family’s historical narrative and illustrate its connection to both local and international military historical events,” says Ontario Regiment Museum assistant curator Sam Richardson, who created it.

Although there are some details which still have to be ironed out, the museum should be opened by next spring and will feature both “a pioneer theme, an Albion/Caledon theme, and an Irish connection,” says Duffy.

Reflecting on the journey Irish immigrants, including his ancestor Eliza Duffy, took to come to Canada, he says it required them “taking the biggest gamble of their lives.”