Caledon East Bicentennial Celebration Was A Day To Be Proud Of

Just Sayin’ Caledon extends thanks to Donna Davies for this recap of the celebration of Caledon East’s Bi-centennial held on August 27th.

Nestled in the Caledon Hills, the village of Caledon East straddles the townships of Albion and Caledon on the ancestral lands of Indigenous peoples, including the Huron-Wendat, and the Haudenosaunee.

It is the treaty and territorial land of the Mississaugas of the Credit First Nation, having been acquired from them by the British Crown through the Ajetance Purchase (Treaty 19) in October 1818.    Although the village has had different names along the way, it has grown and thrived here for over 200 years. 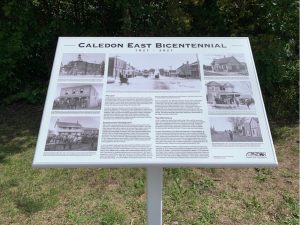 The actual 200th anniversary was in December 2021, but because of COVID the celebration was held on August 27, 2022.  It was the culmination of the efforts of the Bicentennial Committee, Heritage Caledon and the Caledon East & District Historical Society.

The day held some pomp and ceremony – accompanied by the Sandhill Pipes and Drums and the Town of Caledon Fire and Emergency Services Honour Guard, members of the Committees, the Acting Mayor and Councillors unveiled the Bicentennial Plaque.  This plaque stands at the eastern entrance to the Caledon Trailway on Airport Road, as a reminder of the village’s historic background. 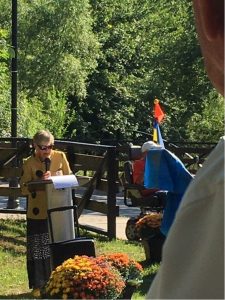 Caledon East Heritage Posters were on display, which told the story of the village’s past, but the day was also filled with fun and excitement.  The Caledon East Park was alive with people enjoying the history, along with the displays, the vendors stands and the food.  But the children had the most fun with Sparky the Fire Dog and honking horns of the Fire Department’s equipment; the visit with Batman and the Batmobile; the free ice cream cones and Bicentennial cookies; the OPP tour, and the games of chance.

The day ended with music and entertainment and a sparkling, huge fireworks display.

The celebration left you with a sense of belonging to a community that has existed and grown successfully for over 200 years, that has much to offer – historic and modern – of which everyone can be proud.

The post Caledon East Bicentennial Celebration Was A Day To Be Proud Of appeared first on Just Sayin' Caledon.