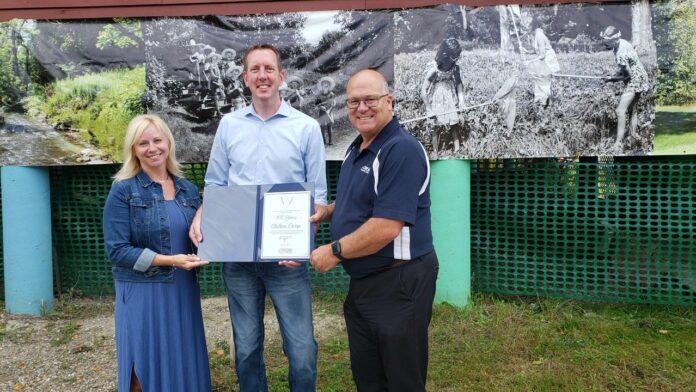 On Saturday, September 10th the historic Bolton Camp marked its 100th Anniversary.  Mayor Allan Thompson along with Regional Councillor and TRCA Chair Jennifer Innis were on hand to present a certificate of acknowledgement to Darryl Gray, the TRCA Director of Education and Training. Mr. Gray gratefully accepted the Centennial recognition of the Camp’s history, stating that Councillor Innis was “one of the best, if not the best, Chairs with whom I have ever worked.”

The sold out event featured guided nature trail hikes and historic walks around the property that recalled the days when marginalized children from Toronto came to connect with nature in Caledon. For seventy-five years the Bolton Camp provided a respite from the gray crush of the city. A place where mothers and children could find the joy and rejuvenation that only time in a natural setting can bring. With its beautiful forest trails, clear Humber River and supportive staff, the Bolton Camp was like a heaven on Earth for many urban families. 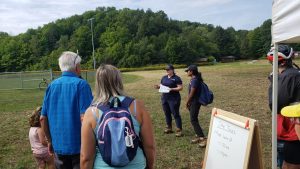 TRCA staff getting set to lead hike at Bolton Camp

On this Saturday, 100 years later, Adrian O’Driscoll, General Manager at the TRCA Kortright Centre, and his staff, helped a new generation of children and their families reconnect with the beautiful Bolton Camp property and its history.

Besides being a children’s camp from June to August, it was also home to the North York and Toronto Board of Education outdoor education residential programs from September to May. When Toronto Family Services closed the camp in 1999 the entire property was purchased by the Bayview Montessori School. It became one of the finest education campuses in Caledon, as well as running a Montessori teacher training center out of the Hindmarsh Lodge adult conference centre. The campus also featured a high ropes course, summer camps, and a training residence for Barrie Shepley’s C3 athletes.

When the Montessori School closed in 2006, it was purchased by developer John Spina. He had hopes of creating an eco-residence for seniors, and a conference centre with nature trails open to guests and the Caledon community. Sadly his dream was blocked by local residents and a competing developer. In the ensuing years the Montessori School and the Camp buildings were wantonly vandalized by local youth. They smashed windows, stole equipment and burned down buildings. The upper site had to be completely razed for security reasons.

Fortunately, the TRCA saw the potential for expanding a protected floodplain corridor along the Humber River and purchased the property a few years later.

The TRCA invitation for this event summarized the history of the Camp perfectly: ”Bolton Camp opened its doors in 1922 and was a popular destination for Toronto families for 75 years. In 2011, Toronto and Region Conservation Authority (TRCA) purchased the property and began developing a plan to re-purpose the site as a community cultural hub: a destination where people will come together to learn, play, create, explore, and share in unique experiences.”

In partnership with the Town of Caledon, the TRCA has begun the long slow process of rehabilitation along with staff and students from Humberview Secondary School. Today the site is home to a Blue Jays baseball diamond for youth, trails are being resurrected and cabins restored. Hopefully the Bolton Camp legacy will live on for generations to come.