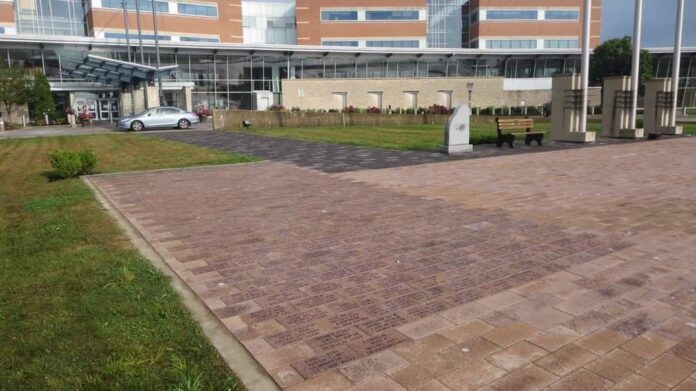 The Pathway of Memories honours current and former OPP members and teams, their families, as well as organizations that have contributed to the history of the OPP in various ways. Each memory stone is donated and has a personalized inscription that pays tribute to its recipient(s) before being laid into the path on the front lawn of GHQ.

The funds raised through the purchase of memory stones go to the OPP Youth Foundation, a volunteer organization that dedicates the funds to Ontario youth in need of positive life experiences and opportunities they would otherwise not have, such as bursaries and youth camps.

The donors and recipients of this latest set of memory stones, as well as other supporters joined OPP Commissioner Thomas Carrique and OPPYF Director Dave Osborne at a special ceremony at GHQ, where the stones were viewed for the first time.

“The OPP is grateful to everyone who generously donated a memory stone to the Pathway of Memories in honour of OPP members and others who are worthy of recognition for contributing to our rich history. Thanks to the ongoing dedication of the OPP Youth Foundation, our under-privileged youth are afforded opportunities that make a much-needed positive impact on their lives,” said OPP Commissioner Thomas CARRIQUE.

“The Pathway of Memories was not only created to support the OPP Youth Foundation, but it also gives people the opportunity to express their recognition to so many of their family, friends and co-workers in a very special way. The Pathway serves as a symbol of legacy that will honour and respect all that has been accomplished. It also serves as a reminder to future OPP members that their strength is built upon the shoulders of those whose names grace the Pathway”, said Retired OPP Inspector Dave OSBORNE, Director, OPP Youth Foundation.

The first inscribed Pathway of Memory stones were unveiled on April 20, 2017.

The Pathway of Memories is open for public viewing on the terrace of the front lawn at GHQ, located at 777 Memorial Avenue, Ontario

How to donate a Pathway of Memories memory stone