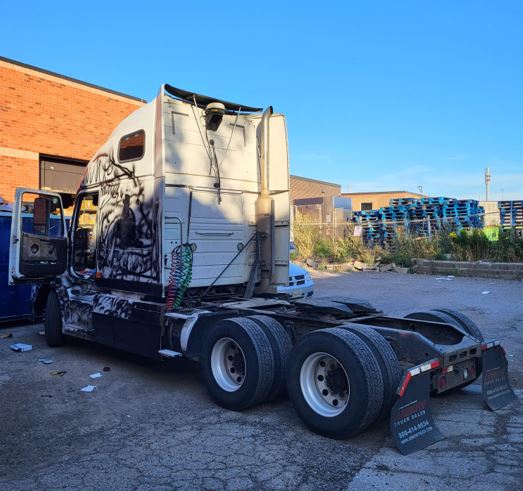 Officers from the Caledon Detachment of the Ontario Provincial Police (OPP) have recovered a tractor trailer and charged an individual that was arrested and charged for a similar offence five days prior.

On September 6, 2022, Caledon OPP was alerted of commercial motor vehicle that was stolen out of the Milton area. The vehicle (the tractor part) travelled to the Town of Caledon and stole a trailer loaded with furniture. Officers located the vehicle, but the driver failed to stop. Black spray paint was used on the vehicle to cover the company name. The trailer was later dropped, and the driver continued attempts to evade police.

The Caledon Community Street Crime Unit (CSCU) was engaged and successfully arrested the driver in the City of Brampton. OPP officers recovered the stolen Volvo transport truck and the stolen trailer, along with its load of furniture.

As a result of the investigation, Jasvinder ATWAL, 44, of Brampton was charged with:

• Dangerous operation of a motor vehicle

• Possession of property obtained by crime over $5000

• Possession of a Schedule I substance – heroin

• Fail to comply with probation

• Operation while prohibited under the Criminal Code

• Fail to company with release order

The accused was held for a Bail Hearing at the Ontario Court of Justice in Orangeville.

The following was seized:

Caledon OPP is working actively with its various partners to combat the growing trend of auto thefts in the Region and across the province. If you observe unusual activity in your community, report it immediately to police by calling 911. Make note of vehicle licence plates if you can. You can also provide information anonymously by contacting Peel Crime Stoppers at 1-800-222-TIPS (8477) or online at www.peelcrimestoppers.ca. When you contact Crime Stoppers you stay anonymous, you never have to testify, and you could receive a cash reward of up to $2000 upon an arrest.

Caledon OPP is committed to enforcement initiatives targeting this issue and will continue to educate residents on crime prevention strategies to minimize victimization.