You Can Help Caledon, C3, And Jessey Set A New World Record On July 1st 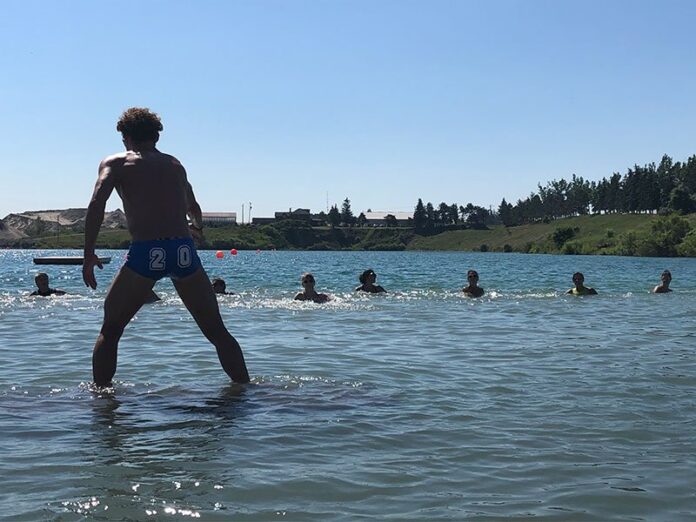 Things have not been boring at C3 this spring!

We hosted the C3 Benson-Royal Kids of Steel Triathlon and had Simon Whitfield in town for the event.

Then 7 days later we had the Ontario STAND UP PADDLE BOARD champs at the James Dick Beach. Along with 3 Olympians who raced and ran clinics. Simon Whitfield, Tamas Buday and Larry Cain. Last Sunday C3 held the Nuvo Iron National Triathlon Race at the Hill Academy north of Alton (if you have not been there you should meet the world class teachers and staff at the Hill Academy, its an awesome school).

Our next and perhaps most fun event is on Friday July 1st.

C3 and Jessey the Elf (yes his legal name) is going to attempt a WORLD RECORD to put Caledon – C3 – Jessey the Elf and James Dick Quarry into the record books.

Jessey has been coming to Caledon for years. He is a world level open water swimmer, surf life saving star and his passion is Water Aquatic Classes. When he first  started teaching in Waterdown, they had 2-3 people sporadically attending the town’s classes. Within 3 months, they had a sold out waiting list for Jessey’s classes.

During the pandemic, with pools closed, Jessey started coming to the C3 James Dick Quarry with his class and doing it in the water at our amazing beach. Everyone loved it. It spawned an idea of having the biggest class in the world. Upon research we found that an Australia had 271 people for their outside in the water class. So being competitive, C3 and Jessey have set out to get 300 people on July 1st to do our class and smash the world record.

Here is where you come in.

Consider coming with your friends and family and being a part of this FREE C3 event. You must pre-register (no cost) so that we know you and how many people are coming to the event. Should we have mega response for the event we will cut off at 350 people so we can have enough Gatorade and beach space.

You can bring kids, grandkids, friends, etc. Simply register your name and the number of people you are bringing for the 10am, Friday JULY 1st (holiday morning fun event). We will go rain or shine.
2. Swim Race

Sign up yourself and your family and friends now at https://www.c3online.ca/world-record-attempt

Our good friend Ed Taccone and the Caledon Fair Board have their July 1st Strawberry Festival just 300m away down the street. We are going to encourage people to drop in for some fun breakfast after the World Record Class.

Obviously we know that later in the day, Caledon has the very popular and awesome CELEBRATE CALEDON from 2-10pm at the Albion Hills Conservation Area.

What a fun busy day we could all have in Caledon on July 1st!

Help C3 and Caledon set a new world record of 300 people on July 1st. Its free, its fun, everyone can do it. People will be in 3-4 feet of warm water on the C3 James Dick Beach. Jessey will have loud – upbeat music and will take us all through a 30min world record fun class. You need either a bathing suit or a t-shirt and shorts and a towel for drying off after the event. You must pre-register so we send you a map and a confirmation note that you are officially in the world record attempt. You can workout as easy or as hard as you wish. Its fun, and free and a great way to celebrate Canada on July 1st. Your help is appreciated.

Finally thanks to the C3 rockstar sponsors who make all the magic of KOS, SUP RACES, RUNNING RACES and on July 1st World Record Attempt. Caledon and C3 are blessed to have Steve Benson and Benson Steel, Phillip Adsetts and Kinetico, Kim Nelson and Royal Containers, Rick Arthur and RA Tech, Carlos and Mary Ann Pacheco and Nuvo Iron, Greg Sweetnam and his James Dick Team. Without these organizations and our world class volunteer team at C3, we could never do the magic we do.

Hope to see you for the 10am July 1st class! We hope you’ll tell your friends and family and share the news on social media! Register now at https://c3online.ca/world-record-attempt

The post You Can Help Caledon, C3, And Jessey Set A New World Record On July 1st appeared first on Just Sayin' Caledon.