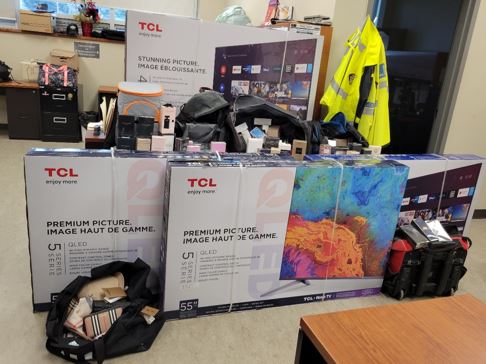 Officers from the Caledon Detachment of the Ontario Provincial Police (OPP) have laid charges and seized stolen property stemming from a truck and trailer theft investigation.

On February 10, 2022, officers responded to a call for service regarding the theft of two stolen transport trucks (tractors and trailers) from a trucking lot in the Town of Caledon. The trailers were reportedly filled with televisions.

In April 2022, the ongoing investigation revealed that at least one of the TVs was being sold at a store in Mississauga. With the assistance of the Caledon OPP Community Street Crime Unit, a judicial authorization was obtained for the retail store.

On April 8, 2022, police attended the store and conducted their search. As a result, four 55-inch TVs, thousands of dollars’ worth of men’s and women’s fragrances, and thousands of dollars of wallets and articles of clothing from Burberry manufacturer were seized.

Ali SHIRZAD, 31, of Mississauga was charged with:

• Possession property obtained by crime under $5000

• Trafficking in property obtained by crime

The accused is scheduled to appear at the Ontario Court of Justice in Brampton on June 24, 2022.

For anyone with additional information are asked to contact the Caledon OPP Community Street Crime Unit at 905-284-2241 or toll-free at 1-888-310-1122. You can also provide information anonymously by contacting Peel Crime Stoppers at 1-800-222-TIPS (8477) or online at www.peelcrimestroppers.ca. When you contact Crime Stoppers, you stay anonymous, you never have to testify, and you could receive a cash reward of up to $2,000 upon an arrest.