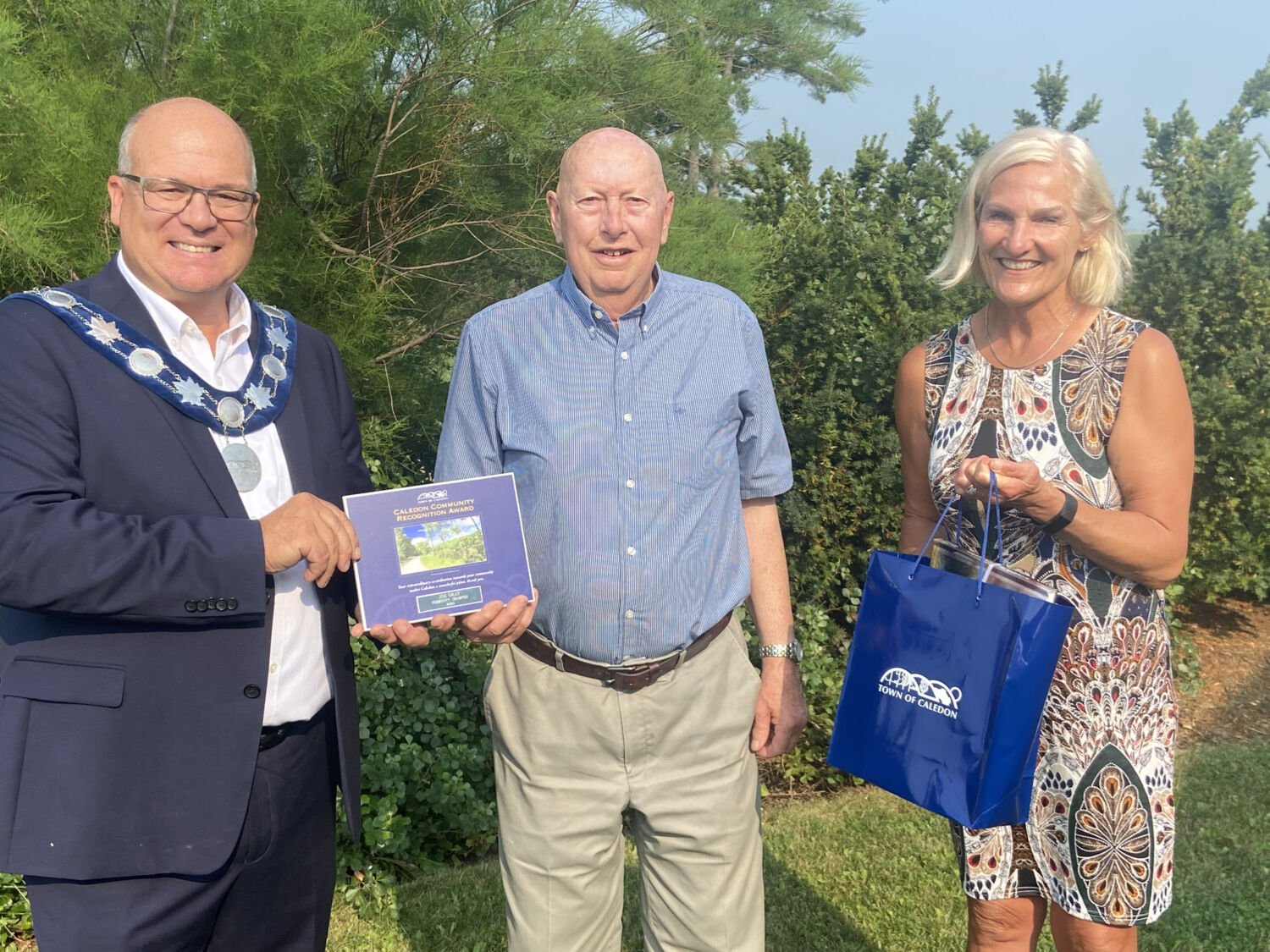 The Town of Caledon is recognizing over 40 outstanding volunteers and citizens as part of its annual Community Recognition awards.

“This is our opportunity to celebrate and thank the outstanding people that truly make us #CaledonProud,” said Mayor Allan Thompson. “From volunteers to athletes to artists and beyond they in their own ways help build and enrich our community.”

Traditionally, Community Recognition has been about recognizing individuals whose efforts have made significant impact towards the development and advancement of recreational sports, arts and culture, environmental leadership or community and social services.

Prior to the pandemic, the Town hosted a special evening ceremony – Community Recognition Night — to present the awards, but because of pandemic safety protocols, the 2020 event was cancelled.

Instead, over the past weeks and months, Mayor and Council have been personally connecting with recipients – where possible – to safely present the awards to the recipients.

The awards are presented in three categories.

Nominations for the 2021 awards are being accepted until September 13, 2021. For more information, visit caledon.ca/crn.

Here are the 2020 recipients, by category:

Joe Gray is a lifelong volunteer in the community.

For many years he was involved in 4-H clubs in Peel. In 1962 he founded the Junior Farmers Club in Peel and in 1963 he was the Founding President of DixieLane Junior Farmers. As Secretary of Peel Junior Farmers, he chaired the committee that organized the Farewell Party of the Junior Farmers Building in Brampton when the Peel Agricultural Society sold the Fairgrounds to the City of Brampton.

He served on the Board of Directors of Peel Soil and Crop Improvement Association and the Board of Peel County Holstein Club. He was Secretary-Treasurer of Peel Federation of Agriculture for a number of years and was a Director of Ontario Federation Agriculture representing Peel. He chaired the Peel 2000 event held at the new Junior Farmers’ Hall at the Brampton Fairgrounds.

He was Secretary-Treasurer of Flowerlea Dairy Co-op for 13 years and later became a delegate, board member and vice president at Gay Lea Foods Co-op. He was also Chairman of Dairyland Transport Co-op.

For the last 14 years Joe has volunteered to help get rid of the invasive species such as purple loosestrife and phragmites, for the Town of Caledon and the Region of Peel, literally digging up hundreds of plants year after year.

He is also a very active member of Mayfield United Church, leading the Young Peoples Group, singing in the choir, and serving on the board of stewards. He was superintendent of the Senior Sunday School for two years. He helped raise funds for their choir when they were invited to sing on stage at Carnegie Hall in 2019.

Gray was founding chair of Central Peel Group of Churches. This group of United Churches grew to include churches beyond Peel and changed its name to The GIFT Group (Growing In Faith Together).

One of his other passions is S.H.A.R.E. Agriculture Foundation, a small, volunteer-managed charity that helps impoverished rural people in Central America, Bolivia, Haiti and Columbia. He has been a strong supporter from its beginning in 1976.

He has been actively involved in municipal, provincial, and federal elections, campaigning for many candidates through the years.

In his own words, Joe says that “helping others towards a better life, either here or internationally, is very rewarding, and I have met and worked with many wonderful people, some now are great friends, and all this is what keeps me going.”